6 Places In Dubai With Incredible Offers This FIFA World Cup

As the world is gearing up for the most anticipated sporting event of the year from June 14th; FIFA World Cup, here are the six best places in Dubai hosting the international event’s live screenings.

Fan Zone at Atlantis The Palm

With a seating capacity of 2,000 people, the World Cup Fan Zone at Atlantis The Palm has two zones, one named ‘The Stadium’ for those who prefer a stadium-like experience to cheer in a lively atmosphere watching matches on a large 28 square-meters screen, while the second zone named ‘The Bench’ has a chilled out ambience and has got a gamer’s corner with PlayStation stands. For the big matches, those coming in groups will have to book a table and have a minimum expenditure of Dhs 1000. Besides the big matches, the venue’s entry is free for women and Dhs 100 for men, including two complimentary drinks.

Catch all the #WorldCup2018 excitement live from Russia on the big screen at #Dubai‘s @ATLANTIS at the Atlantis #WorldCup Fan Zone https://t.co/nBdibfwZ9z #FIFAWorldCup2018 pic.twitter.com/CPpUEK1qq2

Situated at the Emirates Hills, it’s undeniable that the hotel provides the best views of the Dubai Skyline and it’s only getting better, as they’re screening the World Cup with the skyline in the background. The best part, they’re serving a themed A-La-Carte menu and have happy hours going on before and after the match. 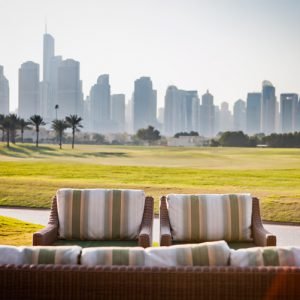 World Cup season can’t get any better than at the two-storey Football Central at Emirates Golf Club. The lounge is screening matches across one giant screen and 12 extra-large screens placed next to each other. The Football Central team will also have your culinary cravings sorted as their snack platters cover chicken wings, sliders, mixed satay, nachos and potato croquettes along with house grapes, hops and spirits. They have two offers going on, serving food and beverages to groups of four, charging Dhs 474 and to groups of 10, charging Dhs 1,120.

Visitors can choose to watch the match both indoors and outdoors at The Els Club as both Lounge 261 and the club’s indoor bar are hosting World Cup screenings. They’ve also got air conditioners placed outdoors and will be having promotions on food and drinks throughout the month-long tournament.

Savour every moment of the #Football with us!

Football lovers are in for a surprise to watch the World Cup live with a picturesque backdrop of Dubai Creek. The QD’s team has got eight high resolution LED screens placed across the area and have offers going on for groups in four and ten. The first option is for four guests, serving a vegetarian snack platter, two pizzas and soft beverages for two hours, charging Dhs 380. The second option is for ten guests, serving two snack platters with 30 beverage vouchers.

Opening just in time before the World Cup kicks off between Saudi Arabia and Russia playing the first match, Wavebreaker Beach Bar and Grill has come up with a tent and a new beach stadium, offering pool access for the entire day for Dhs 150 with a choice of signature burgers and hops served.

Mark your calendars 📆 as we welcome you to JBR’s favourite watering hole this football season! ⚽ 🥅 🏆 @ JBR