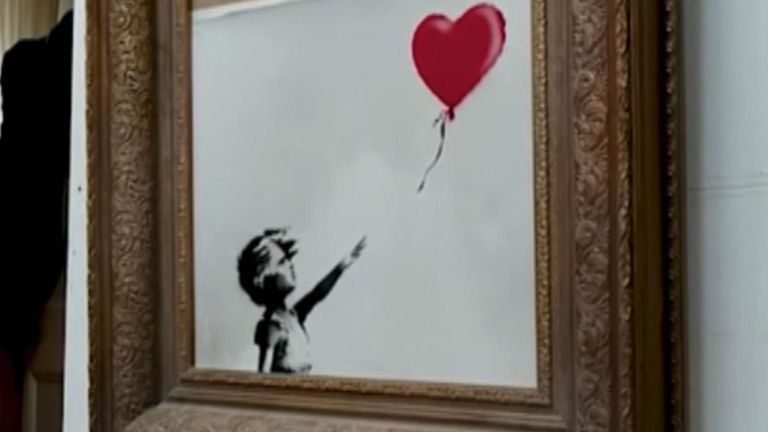 Banksy Painting That Shreds Itself Biggest Prank In Art History

World-renowned artist Banksy pulled off the biggest prank in the history of art by ‘self-destructing’ his artwork after being auctioned for £1.04m(Dhs5.03m).

Prank pulled off at the auction house

Banksy’s ‘Girl With Balloon,’ which shows a young girl reaching for a heart-shaped balloon was the last artwork auctioned at Sotheby’s in London last week. Right after the auction ended, buyers witnessed an alarm go off and 60% of the artwork being shredded. Even though the buyer’s name isn’t disclosed, the auction house is in talks about the next steps after getting ‘Banksy-ed.’

His artwork was never supposed to be auctioned. Taking to Instagram, the 44-year old artist released a video admitting he formed a secret shredder four years ago “in case the artwork was ever put up for auction.” The video documents his artistry being auctioned, followed by the prank surprising everyone. What’s interesting is the caption he added, which reads “The urge to destroy is also a creative urge” from iconic Spanish painter Pablo Picasso.

What could the post-shredded value be?

MyArtBroker.com, a platform for artists which sells artworks including Banksy’s pieces, believe the shredding increased the ‘Girl With Balloon’s worth by “a minimum 50% to its value,” while art experts find the prank an example of “opportunistic vandalism” and value the work at just £1(Dhs5), according to Brit news outlet, Metro.