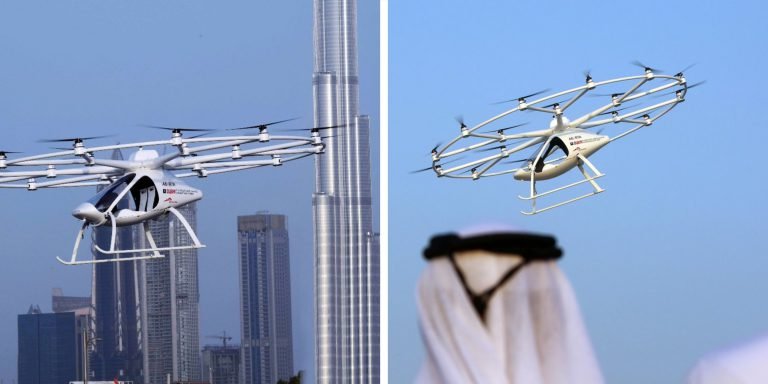 Brace Yourselves! Dubai Is Launching Flying Taxis By 2020

Within the next two years, Dubai is establishing a new form of transportation that’s going to revolutionize the norms of daily commuting.

Flying taxis to launch by 2020

The future is here (very close perhaps!) as US tech firm Vimanda Global conducted a trial run of its autonomous aerial vehicle (AAV) in Dubai and looks like it was successful. The flying taxis have a top speed of 244 km/h and a weight capacity of 400 kgs. With such performance, you can arrive at your destination in a matter of minutes!

Flying taxis could be such a relief to the traffic between Dubai and Sharjah. With the arrival of aerial vehicle services and the Dhs200 million Badee’ bridge project, here’s hoping drivers won’t have to rely on E311, Ittihad Road and alternate roads for daily commuting anymore, at least during peak hours.

Since last year, Dubai’s Roads and Transportation Authority (RTA) conducted multiple test flights,  the maiden test flight was attended by Dubai’s Crown Prince, Sheikh Hamdan bin Mohammed Al Maktoum. He said “This is another testament to our commitment to driving positive change. We are constantly exploring opportunities to serve the community and advance the prosperity and happiness of society.”

Hyperloop project also in the works

Meanwhile, RTA has an ongoing collaboration with Virgin Hyperloop which can connect Dubai to Abu Dhabi in just 12 minutes compared to “an hour and a half otherwise”! Its pods can travel at a speed of 700 km/h and according to digital media outlet, Seeker, it can save “an estimated $800 million in lost working hours”.