There are certain things you need on a flight to Dubai now – mask, sanitiser and, apparently, AED9 million smuggled into five suitcases.

A British woman was caught flying from Heathrow to Dubai last Saturday with five suitcases stuffed with £1.9 million in banknotes. Which is equivalent to around AED9 million.

Unsurprisingly, she’s now been charged with money laundering according to the UK Border Force. Ever wondered what that looks like? Well, here you go! 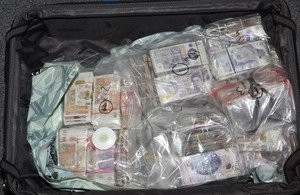 The British woman has been named as Tara Hanlon from Leeds. Another woman who was arrested at the same time has been released.

Britain’s immigration compliance minister Chris Philp said that stopping the export of undeclared cash from the UK was a “vital step in clamping down on organised crime gangs”.

It seems Dubai is a popular place for smugglers. It was just a month ago that gold bars worth AED3.5 million were caught in a lunchbox on their way to Dubai.

Apart from the fact they weighed a bicep-building 16kg which is alarmingly heavy for a lunch box. Want to know how much that is? Well, according to a police spokesman, the bars weighed as much as “an adult Staffordshire bull terrier”. Which is worryingly specific.