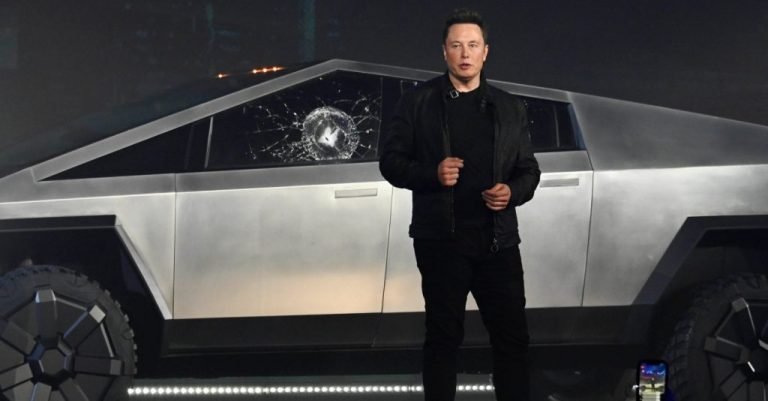 Ooh that was cringeworthy viewing! Elon Musk was left red-faced at the launch of his new Cybertruck when he asked lead designer, Franz von Holzhausen, to have a go at smashing the ‘Armour Glass’ window. Franz did as instructed and the window unexpectedly shattered.

Musk had casually (and one might even say, smugly) invited his colleague to throw a heavy metal ball directly at the window of the Cybertruck. Franz was hesitant at first, and asked,”Sure?” but the CEO of Tesla confidently responded, “Yeah!” and with that, the metal ball was lobbed at the window. Musk couldn’t contain his surprise when the glass shattered on impact with the ball, exclaiming, “OMFG” and laughing nervously. Cringe!

The atmosphere suddenly got quite awkward, and even more so when the ball was thrown at the second window and it also smashed. Why would you do that? Musk tried to style it out by saying, “It didn’t go all the way through” and then added that perhaps it needed a little extra work in “post”.

The Cybertruck has been built to withstand dents, scratches, and even 9mm bullets. It’s actually been made with the same metal used on the SpaceX Starship and the appearance is reminisce of the 1976 Lotus Esprit which featured in the James Bond film, “The Spy Who Loved Me”. Unlike the demo showed, the Armour Glass windows of the Cybertruck are also capable of taking substantial force. Elon felt the need to prove it by uploading this video to Twitter after the major fail at the launch.

Franz throws steel ball at Cybertruck window right before launch. Guess we have some improvements to make before production haha. pic.twitter.com/eB0o4tlPoz

Forbes reported that the blunder cost the electric car giant three quarters of a million dollars in a day based on Tesla’s share price dropping by 6%. Despite that, Tesla’s Chief Exec said on Saturday that there had been about 150,000 orders for the Cybertruck already after its Los Angeles unveiling.

Social media star and fast car enthusiast, Alex Hirschi, aka Supercar Blondie didn’t hang around in buying a Cybertruck. The Dubai-based Australian uploaded a video yesterday revealing that she had already been out to order one of the futuristic looking trucks.

In reality, only a deposit of $100 (AED 367) was required to secure Tesla’s latest utility vehicle which will be available off the production line in late 2021. Prices start at $39,900 (AED 146,533) and the pickup comes available in three options based on 250 miles, 300 miles and 500 miles of range. Want to pre order yours? Click here. You can also book the Tesla Model 3 but you’ll have to pay a slightly bigger deposit!