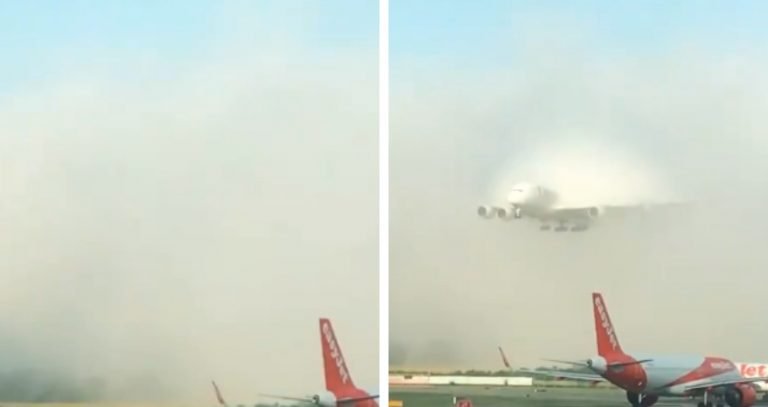 Emirates A380 Flight Goes Viral After Landing Through The Clouds

A passenger at London’s Gatwick airport caught the incredible moment an Emirates pilot landed an A380 flight through the clouds.

Viral footage of Emirates A380 flight landing through the clouds

Speaking of touchdowns, you’d most probably recall the chaotic moments of flights bouncing off the runway, but this rare new footage offers a new perspective to landing.

Emirates shared footage sent by a passenger at London Gatwick airport, showing an A380 flight descend upon a runway covered by a patch of clouds. Check it out:

Emirates ranks the best airline in 2019

2018 a tough year for Emirates

Last year saw Emirates’s profits shrink down to a 69% decline. Their revenues increased by 6% to AED 97.9 billion (US$ 26.7 billion), with the help of steady passenger and cargo performance. However, their year-to-year profit reported a 69% decline, earning a total of AED 871 million (US$ 237 million). Here’s hoping for a better financial year. You can now play Squid games at Expo 2020 Dubai

Five amazing facts about Ain Dubai as it opens today