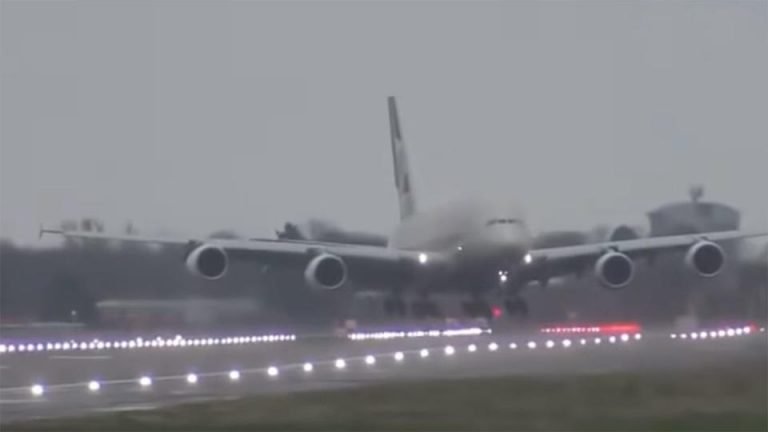 An Etihad A380 plane amazingly landed sideways during Storm Dennis in the UK last weekend at Heathrow.

The A380 is the world’s largest commercial passenger plane and in the amazing video below, you can see it as it comes into land. Sideways.

With winds of up to 50mph, the pilot amazingly negotiates the strong crosswinds. At one point it’s virtually pointing at 90 degrees to the runway. But showing incredible skill, the pilot pulls the plane round to land on the runway and get its wheels on the tarmac.

Storm Dennis wreaked havoc across the UK, with flooding and high winds reported across the country. There were hundreds of flood warnings across the UK as a month’s rainfall fell over just 48 hours.

Before you watch, make sure you’re sitting comfortably and there’s nothing around to break and knock over. This is a tense watch, we can only imagine what it was like on board as the Etihad plane lands sideways.

A spokesperson of Etihad, based in Abu Dhabi, confirmed the video was authentic and recent, adding that the A380 flew from Abu Dhabi to London. There are no reports of whether the pilot was wearing clean underwear after that landing, but we’d be pretty surprised!

Keep up to date with the latest UAE news with our Dubailad page here.