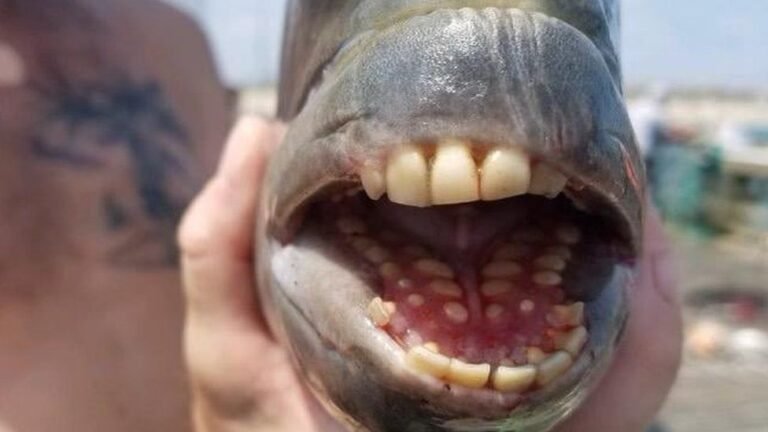 Look away if you’ve just eaten, but a fish with ‘human teeth’ has been caught by a fisherman in North Carolina, America.

And its wonderful face was shared on Facebook by Jennette’s Pier in Nag’s Head, North Carolina.

The fish is thought to be a sheepshead fish, known for the rows of teeth that it uses to crush prey.

And considering it eats oysters, clams and barnacles, it really needs all those teeth!

Nathan Martin, the lucky fisherman who reeled in this beautiful catch was caught by surprise when he saw a ‘mouth full of teeth.’ And it’s fair to say the fish put up a good fight.

“It’s a very good fight when you’re fighting on the line, it’s a really good catch, and it tastes very good,” he told McClatchy News.

Then again, with those gnashers, we’re surprised it didn’t just bite the line off completely!

Staying in the animal world, an ultra-rare White Rhino has been born at the new Sharjah Safari park giving further hope for the animal species as it comes back from near extinction.