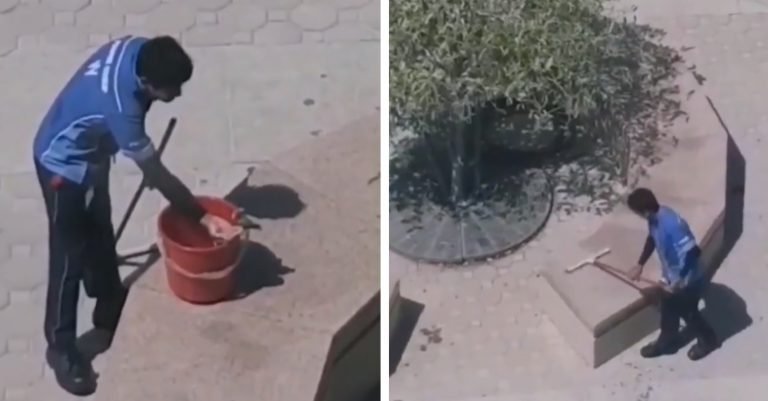 How Nice! This Sharjah Janitor Saved A Bird With A Simple Move

Summer season is at its peak during this point of the year and even birds are finding it difficult to bear the heat, but this janitor in Sharjah did a simple move to help the bird.

Check out this video of him helping the bird

During a sunny day in the cultural capital, a janitor with a mop broom and a bucket of water was going to start cleaning a bench but a bird was on the bucket, looking tired and thirsty. Looking at the bird’s situation, he gave water from his hands and much to his surprise, once he started his work, the bird flew and landed on his head, refusing to fly anywhere else. The video of his save has been received with numerous social media users applauding his effort, so nice!

Weather is expected to peak at 42° this week

Based on the weather forecast according to Weather.com, this week’s temperature will range between 32° to 42° celsius. The hottest day this week will be this Friday, touching 42°. The summer season typically goes on till mid-October, followed by winter during the end of the year.

Last month, Dubai’s Crown Prince, Sheikh Hamdan bin Mohammed Al Maktoum won everyone’s hearts after saving an Arabian Gazelle. The situation goes like this, Fazza found an injured Arabian Gazelle at the Nad Al Sheba sports complex finding it difficult to move because of a rope tangled on its feet and on its horn. The Crown Prince was quick to go and help remove the rope and feed him water.