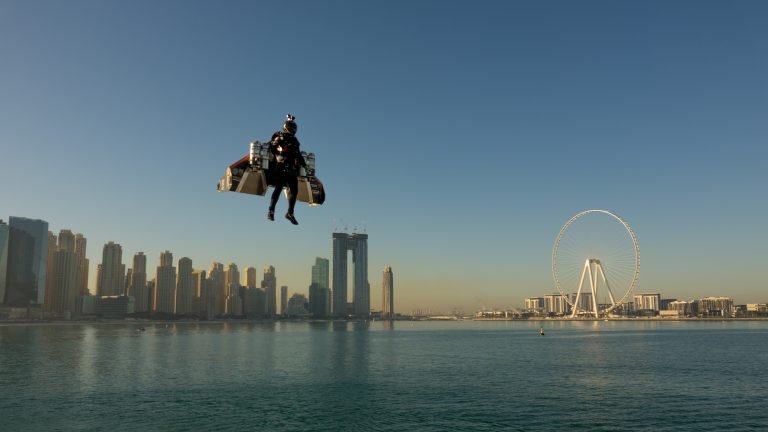 Is it a bird, is it a plane? Nope, that’s Jetman breaking more records in Dubai!

Jetman, a Dubai hero and certified Dubailad, made more history today as he was the first to achieve 100% autonomous human flight.

Jetman AKA Vince Reffet, took off from the Skydive Dubai runway and reached a height of 100m in just 8 seconds. He then smashed through the 1km barrier in just 30 seconds, at an average speed of 130 knots.

And, just because he’s Jetman, he finished the three-minute flight with a roll and a loop at nearly 2km above Dubai. The man is an absolute legend!

The latest record Jetman broke was flying directly upwards from a standing start without the need for a platform.

Using a carbon fibre wing powered by four mini jet engines, he reached speeds of 400km/h. To put that in context, that’s around half the speed of a full-sized aeroplane.

This is the first time that a pilot has combined low altitude hovering and high-altitude aerobatics in the same flight.

The flight – and the technology used to get Jetman into the air – was part of Expo 2020. Three engineers helped create the new jetpack while also minimising the risk of flying with four jet engines strapped to your back!

Should anything happen during the flight, Reffet was protected by a pyrotechnic safety parachute. And the team went through 50 practice flights and over 100 take offs and landings to get to this stage.

“We are so happy we achieved this incredible flight. It’s the result of extremely thorough teamwork, where each small step generated huge results. Everything was planned to the split second, and I was overjoyed by the progress that was achieved. One of the next objectives is to land back on the ground after a flight at altitude, without needing to open a parachute. It’s being worked on.”

Where next for Jetman? Space?