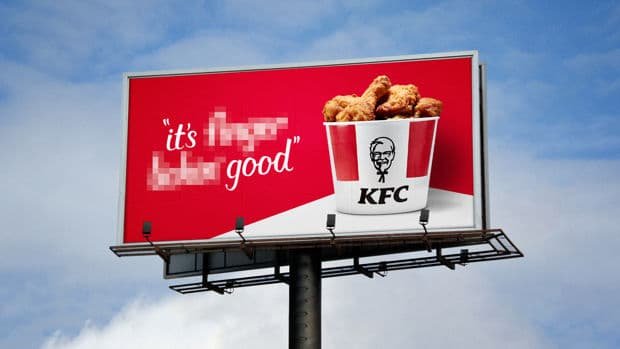 KFC drops its 'Finger Lickin' Good' slogan due to pandemic

KFC has dropped its world-famous ‘It’s Finger Lickin’ Good’ slogan as it adapts to life during the Coronavirus pandemic.

With face masks a common sight and people told to wash hands, licking fingers is high on the list of things we really shouldn’t be doing.

Their new campaign will include posters and packaging with the slogan blurred out and pixellated.

The slogan has been in use for over 60 years and it most recently brought the catchphrase back into use in 2008 after a decade of not using it. But they’re adapting to global events in 2020 and putting the slogan on a break.

“We find ourselves in a unique situation – having an iconic slogan that doesn’t quite fit in the current environment,” said Catherine Tan-Gillespie, KFC global chief marketing officer. “While we are pausing the use of ‘It’s Finger Lickin’ Good’, rest assured the food craved by so many people around the world isn’t changing one bit.”

As well as dropping their slogan, KFC is looking at the next food revolution which could mean 3D printing its chicken nuggets.

With increasing attention on the world’s resources, global food chains and animal welfare, some of the biggest companies in the world are looking at the alternatives.

And for KFC, that means using 3D printing to create its chicken nuggets.

Yes, you did read that correctly. And no, we don’t know how we feel about it either.