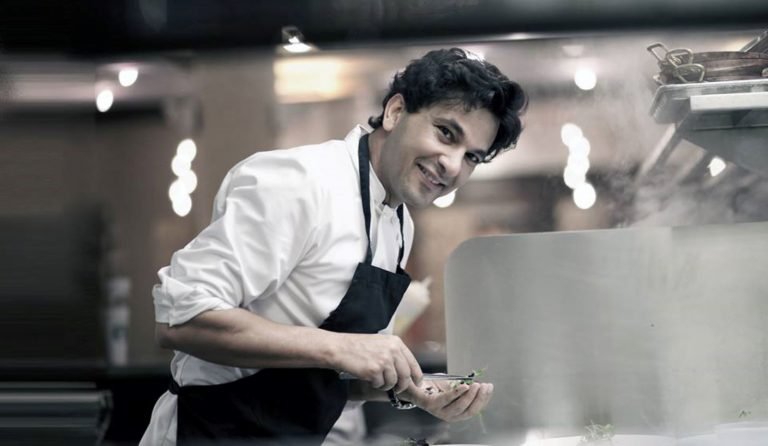 Michelin star chef, Vikas Khanna has just opened up a stunning new restaurant in Dubai. Kinara, located in JA Lake View hotel, is now open to diners and promises an inspired menu with all the best flavours that India has to offer.

Food from a world famous chef

Khanna is reknown by foodies worldwide thanks to his extensive career in the restaurant industry. Also a writer, poet and film maker, the talented chef earned a Michelin star for his New York based restaurant, Junoon. With critics from the New York Times singing his praises, the restaurant has gone on to retain its Michelin status year after year since it was first awarded in 2011.

Vikas is also widely recognised due to his TV appearances on a number of different shows over the years. He’s featured as a judge on MasterChef Australia and hosted the second season of MasterChef India. You may also have seen him hosting on A Twist of Life or appearing in Gordon Ramsay’s shows, Hell’s Kitchen and Nightmare Kitchens. He talks about some of his experiences in the celeb world, including cooking for Barack Obama, in our interview with him. Watch it here:

Your tastebuds will thank you

Indian cuisine has a reputation for bursting with flavour and spices, but when it’s delivered by the likes of Vikas Khanna, you can be sure you’re in for something extra special.

Lead by Khanna’s protégé in Dubai, Chef de Cuisine Ashish Kumar, the menu has been described as a ‘journey of the senses and an explosion of flavour’. We asked Vikas about what to expect from the original dishes on offer. His twist on the classic kebab, made with yoghurt, is something we’d never seen before! You can expect more original offerings from the broad menu, which includes paneer with a green mango reduction and a kumquat-ginger marmalade, sesame-crusted scallops with a coconut-mango sauce and brown butter, tandoori lamb chop with sweet potato mash and green papaya chutney. Also on the table is a braised chicken biriyani with mixed berries and yoghurt cucumber dip.

Let’s not forget the desserts, which are sure to keep those with a sweet tooth satisfied. There’s a saffron-rose pudding with rose petal jam, cardamom, a banana-caramel sauce and candied nuts, also getting out mouths watering are the pomegranate poached pears with saffron cream and coconut ice cream.

Check out our eat section for more great places to dine.