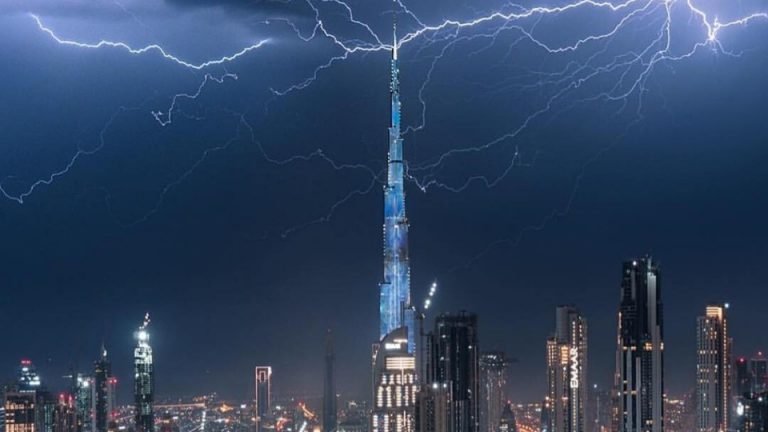 Dubai experienced some of the heaviest rainfall in years over the weekend, with forecasters predicting more rain – and even snow in the region – later this week!

The 10-hour thunderstorm on Friday night and Saturday morning brought roads to a standstill, over 1,300 accidents and causing dozens of flights to be delayed or cancelled.

In total, over 150mm of rain fell during the downpour. To put that in context, that’s 15 times the average rainfall for the entire month! And it fell in just a few hours.

More rain is scheduled for Monday and Tuesday night according to the National Centre of Meteorology. They also warned there was “a probability of some freezing rain or snow over the mountain peaks,” with flurries already reported in Saudi Arabia.

There were some incredible videos and photos taken across the weekend of the Dubai rain detailing the chaos the downpour created. And this well-timed video shows the Burj Khalifa being struck by lightning during the storm.

While the roads have largely gone back to normal, Dubai’s airports are still reeling from the flash flooding.

Dubai International Airport urged the public to allow “significant” extra time for journeys, with dozens of journeys delayed. Fly Dubai confirmed they had to cancel 13 flights in total.

And with more rain expected, the airport has asked those flying to check ahead and leave as much time as possible.

Why was it so wet?

A weather forecaster from the NCM explained why the UAE had been so unsettled. “Since Thursday, cold air is descending towards the UAE from the western region and the Red Sea. Right now both the upper air and surface have low pressure. And, when the cold air mass reaches the UAE and there is low pressure, it helps to generate clouds.”