It always pays to check how much money is down the back of the sofa. Or stuffed into a plastic bag in a wall, in this case as $18m was found stuffed in a wall in Pablo Escobar’s house.

The stash was found by his nephew Nicolás Escobar who has lived in Pablo Escobar’s house for the last 5 years.

Amazingly, a ‘vision’ told Nicolás where to search for money in the apartment where he lives in Medellín. The only visions DubaiLAD get are of us eating hummus and shwarma way after our bedtime. 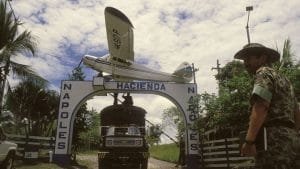 Apparently, it’s not the first time that he’s found money stashed by his uncle. Pablo was a famous Colombian drug lord and would regularly hide money around his properties in case he had to leave in an emergency.

As well as the cash, Nicolás found “a typewriter, satellite phones, a gold pen, a camera and a film roll yet to be developed.” We’d love to see what’s on that film roll!

Sadly, some of the decades-old banknotes had rotted and were unable to be used. And no, his nephew can’t claim ‘finders keepers’ to claim the money.

It’s fair to say Pablo had a fairly fluid relationship with money. At his peak, he was said to be the 7th richest man in the world, making $420 million a week. Rumour has it that he once started a fire with $2 million because his daughter was cold.

If you haven’t already watched it, Narcos on Netflix is a brilliant insight into the drug wars of the 80s.