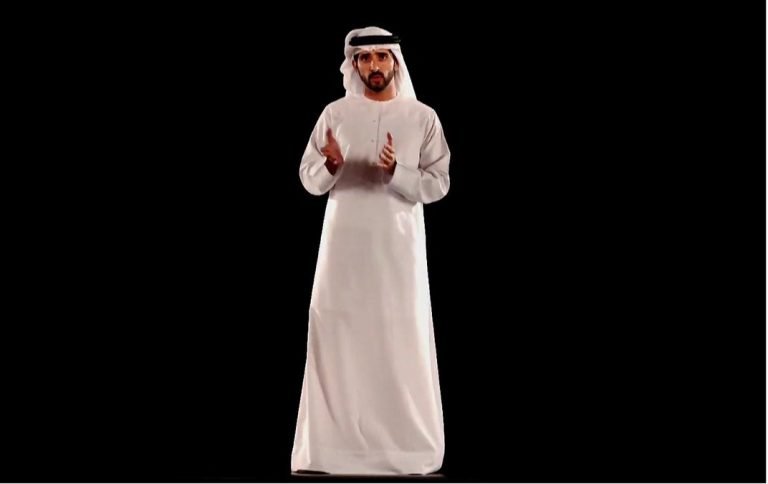 With the use of a 3D holographic display, our very own Crown Prince, Sheikh Hamdan delivered a lifelike speech at the recently concluded World Government Summit.

Dubai’s tech and social media-savvy Crown Prince, His Highness Sheikh Hamdan bin Mohammed Al Maktoum used a virtual hologram to deliver a speech on the topic, ‘7 Shifts Shaping Future Cities’ during the sixth edition of World Government Summit at Madinat Jumeirah last week. He shared the video with his 3.7 million followers on Twitter, saying “Anticipating future shifts & challenges, we need to harness the power of innovation & creativity to set standards for smart cities.”

Dubai a “model for future cities”

Sheikh Hamdan followed his speech by praising the city as a “model for future cities” on Twitter. The Crown Prince says, “World cities consider Dubai as a model for future cities. We are working hard to realise the vision of His Highness Sheikh Mohammed bin Rashid Al Maktoum to place Dubai 10 years ahead of other cities. Concerted efforts are required from gov’t & private entities to make Dubai the world’s no. 1 city.”

Check out Sheikh Zayed’s speech in a hologram

To honour the UAE’s founding father and first President of the UAE, His Highness Sheikh Zayed bin Sultan Al Nahyan’s centennial anniversary last year, a production studio released a four-minute-long video showing the founding father deliver a lifelike speech in a 3D hologram. The speech derives from archived footage when Sheikh Zayed urged the UAE’s youth to work hard for the country. Check it out: