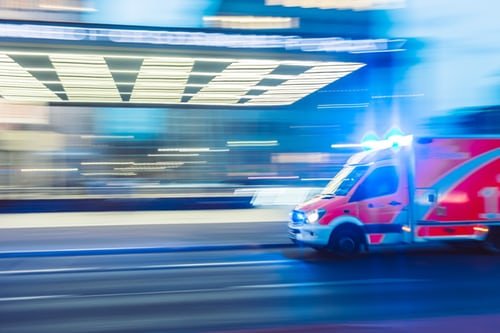 For illustrative purposes only

This morning, 8 people died in a road traffic accident that took place on Sheikh Zayed Road. Another 6 were hurt during the collision involving a mini bus and a truck.

Dubai Ambulance Service said that the incident happened at around dawn on the E11 going towards Sharjah near Mirdif City Centre. All 14 passengers were rushed to Rashid Hospital with those who died now moved to the mortuary. The victims who died were 7 Indians and 1 Pakistani, not yet named.

It is thought that the smash happened due to drivers not travelling at a safe distance from other vehicles and a lack of attention. Dubai Ambulance Service posted an update on their Instagram.

Dubai police later posted an update with a photo of the terrible accident to Twitter.

This awful news comes after Abu Dhabi shared a video of a shocking traffic incident showing cars spinning out of control. They have been known to share footage in the past to warn drivers. Their current communications come as part of a year long campaign to educate road users about safe driving.

Police warned drivers to avoid distractions, such as using smart phones and taking photos while driving. They also mentioned the importance of taking proper rest in between driving and avoiding eating and drinking behind the wheel. Dangerous motorists could be landed with a fine of AED 800 and 4 points for breaking the rules.

A big cause of accidents in the UAE is lack of the use of indicators when driving. A new study, ‘Behind the Wheel’ reported that drivers rarely use their indicators during potentially dangerous maneuvers such as lane changes, merging onto other roads and turning.

Unfortunately, imposing fines of Dh200 in Abu Dhabi and 3 black points or Dh400 in Dubai does not stop drivers from making the potentially life threatening mistake. In Ajman, fines of Dh1,000 are issued when drivers make dangerous deviations on the roads. With better awareness of the problem, it is hoped that safety on the roads will improve.

RoadSafetyUAE estimates that indicators are not used 47% of the time.