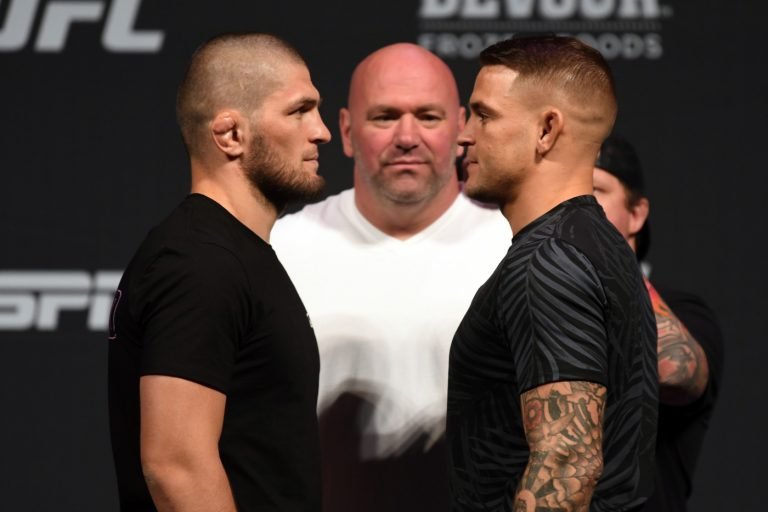 Yas Island has been electric surrounding the highly anticipated UFC 242 and Abu Dhabi Showdown Week has taken over the capital with concerts from Red Hot Chili Peppers, live performances from Tiny Tempah, Rudimental and Sigma plus we’ve seen UFC champions such as Henry Cejudo, Valentina Shevchenko, Kamaru Usman & Zhang Weili descend on the emirate to join in on the fun

After a crazy night of fights, DubaiLAD brings you the results from the main card.

About the bout: Both fighters started cautiously as Dustin fires of a few shots after which Khabib successfully takes him down and gets full mount and transitions to back looking for the rear-naked choke, Dustin manages to get to his feet but is taken down again as Khabib ensues with his trademark ground and pound. Round 2 and Dustin hits Khabib with a shot that wobbles him but he recovers as Dustin chases him around the octagon eventually Khabib lands some shots himself and securing another takedown Dusting get up and they have a grappling exchange against the fence and Khabib eventually takes him down again. Round 3 Dustin gets taken down again and goes for a guillotine choke which is in tight but Khabib manages to get out and transition to Dustin’s back sinking in the rear-naked choke

🗣️ “Nurmagomedov at his mauling BEST in Round 1️⃣!”@TeamKhabib #UFC242 🦅

About the bout: Edson started by utilizing leg kicks early as both fighters exchanged blows. The Brazilian hits Paul with a shot that opens a cut followed by a heavy body kick. Referee Herb Dean brought in the doctor to check Felder’s cut and they continue trading blows on the feet, Edson getting the better of the exchanges. Round 2 Edson takes Paul down and both trade shots on the ground, Paul attempts an armbar but Edson escapes and they get back to there feet. Round 3 sees both bloodied fighters have success on their feet. Paul looked the fresher of the two stalking his opponent but Edson landed some good counters and took Paul down at the end of the round.

About the bout: Round one both fighters were cautious, trying to get their rhythm, Islam did slightly better in the exchanges. Round 2 Islam attempts a head kick which prompts Davi to respond with a quick combination. 2:30 minutes into round 2 Davi lands a hook that stuns Islam momentarily and with one minute to go Davi stalks Islam as they trade blows. At the beginning of round 3, Islam caught Davi with a punch that knocks him down and starts to ground and pound him and keeps top control until the end.

🗣️”Who wins, Barboza or Felder. I am ready.”@MakhachevMMA has called his shot at #UFC242! 👀

About the bout: Curtis goes straight for the takedown and looks for submission, however, Shamil manages to get back up. Curtis takes his opponent down again and takes his back. Towards the end of the round, he gets Shamil in full mount and starts raining down punches and elbows. Abdurakhimov lands a few good punches at the beginning of Round 2 but Curtis takes him down with ease and continues his ground and pound finally forcing a stoppage by referee Mark Goddard.

“It feels really good to get the win and I’m really excited to go for the next one. The fight was exactly how we predicted it might happen; how to hold him, get him on the ground, takedowns, everything. We have now got to wait and see what happens next, but I am ready for anything, anyone.”

About the bout: Maribek got the better of the stand-up exchanges at the beginning of round 1 landing a hard shot followed by a short flurry of punches. Round 2 saw much of the same until Taisumov took Ferreira down with a skilful throw from which the Brazilian got back up and they started exchanging blows again with Diego stalking his opponent around the ring. With one minute to go, Deigo attempted a takedown which was easily stuffed. Ferreira started Round 3 quickly with a big knee attempt and continues stalking his opponent around the ring, having found his rhythm he’s landing the majority of the strikes, Taisumov looks the more fatigued.

About the bout: Both ladies came out of the gates strong landing shots. Joanne took Andrea down and landed some decent punches and a knee as she got back up. Then Andrea took Jo down and ended up with top position transitioning to side guard where she was looking for a submission which never came. Round 2 was very evenly matched both ladies had success on the feet and both took each other down. Round 3 saw the ladies trade shots and attempt takedowns, Andrea eventually landed a takedown however Joanna popped back up without taking much damage and the pair continued trading shots on their feet in a very evenly matched fight

💥💪@DRkneevil with a MASSIVE elbow in round one! #UFC242 pic.twitter.com/WFdQapHk89

About the bout: Zubaira received a warm welcome from the Abu Dhabi crowd as both men started cautiously feeling each other out, when 2 minutes in Zubaira landed a clean punch knocking Murphy down momentarily as the Russian pounced on his opponent landing multiple punches however, Murphy weathered the storm as Zubaira looked to control top position on the ground. Round 2 started with a back and forth stand up exchange until Zubaira took Murphy down with ease, Murphy looked to finish with a Guillotine choke from bottom position which was slipped out of and both men found some success on their feet. Round 3 saw Zubaira try to take down Murphy multiple times without success then with 2 minutes remaining of the round he manages to get his opponent to the floor and gain top position eventual transitioning to his back, Murphy managed to stand up and a grappling match ensued at the side of the cage.

About the bout: Liana started cautiously as Sarah marched forward. They exchanged a few blows when Sarah pushed Liana to the cage to try and take her down. Round 2 saw Sarah start much more aggressively as the two trade blows on their feet. Sarah tries to take her down and visa versa, trying to defend the punches but unable to counter them. It’s all forward movement for Sarah in the third round as she took down Liana successfully, followed by a series of punches and elbows that lead to the stoppage.

#UFC242 Official Result: @SarahCheesecake Moras def Liana Jojua by TKO at 2:26 in Round 3.

“It feels so good to be the first female to win a UFC fight in Abu Dhabi. It’s amazing. It means the world to me and I hope it means the world to the people here. I hope more people can get into the sport and it opens their eyes. I hope this victory will be enough to get me another fight! It was the last fight on the contract, I hope UFC still likes me as I’ve still got a lot more to show.”

About the bout: Ottman started off on the offensive and connected with some straight punches and a low kick. Teemu tried to take Ottman down but it was all too easy for the Morrocan-origin fighter to stuff the attempt. Towards the end of the first round, Ottman caught his opponent with a clean punch to the temple knocking him to the canvas and the fight was stopped.

Moving up to 1️⃣2️⃣-0️⃣ on his debut!

Keep your eyes on @OttmanAzaitar folks! 👀

About the bout: UAE fighter Belal Muhammad had the support of the crowd as he dominated the first round connecting with a couple of clean punches and taking down Sato landing a small flurry of ground and pound. Belal took his opponent down again towards the end of the round looking for a rear-naked choke. Round 2 saw the fighters in a predominantly stand up battle with Muhammad getting the better of the exchanges. Round 3 started with a stand-up battle and saw Belal take Sato down and finish him via rear-naked choke, his first submission inside the octagon.

“I knew I had to go out there and put on a great show for the middle east, this is my home crowd – the love and support I’ve been getting this week has been great. I was looking for a finish and I’m glad I got it. I want to fight someone ranked next.”

About the bout: Muslim caught his opponent with a good roundhouse kick after which the fight paused due to low blow from Nordine, once the bout resumed Muslim applied dominant pressure stalking his opponent and TKO’d his him with a clean right hand in the first round.

About as clean of a knockout as you’re going to see! 👊

Muslim Salikhov gets it done in the first at #UFC242! 🇷🇺

About the bout: Thanks to a series of clean shots and a couple of takedowns, Omari Akhmedov (19-4-1) bagged a victory defeating Zak Cummings. (23-7-0). Omari says:

“I really felt the support of the crowd tonight. Every punch, every takedown, they were there for me. It was like I was fighting at home. It’s now the third time I’ve fought on the same card as Khabib and it’s been another good night. It is very good for the focus and very good for our exposure because all the attention is on Khabib, but then you always get some of that attention. It’s been very good for me and I hope to do it again soon.”

About the bout: Madge continues his winning streak with six consecutive wins after defeating Fares Ziam. He says:

“I’m feeling good, the change of opponent meant I had to change my training up a little. I also had to prepare for the heat here in Abu Dhabi. I’m happy with my performance and think I showed a different side to me. The support I have from my South African fans has been unbelievable, I’m really happy to bring this win home.”

How many did UFC Pundit Dan Hardy get right?