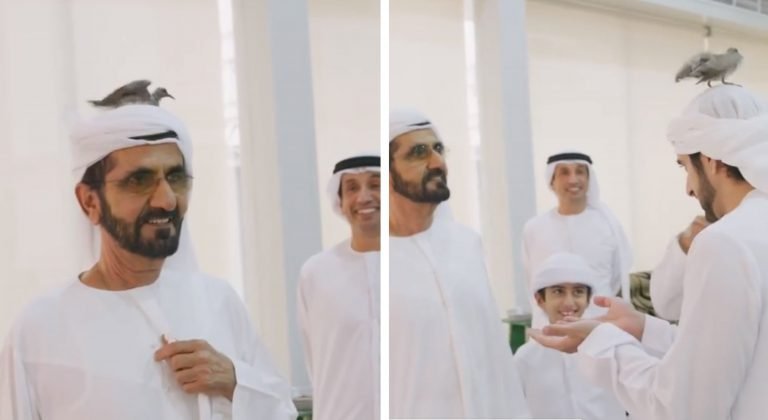 Sheikh Mohammed Spends Time With Birds In The Most Endearing Way

Dubai’s ruler, Sheikh Mohammed is known as a conservationist and was snapped in an adorable video with his son, Sheikh Hamdan spending time with two birds.

His Highness Sheikh Mohammed was shown observing the two feathered friends until one took off and landed on Sheikh Hamdan’s head, soon after which the bird landed next on Sheikh Mohammed’s head, which delighted him and the people around the video. Sheikh Hamdan shared the video on social media and was received with 6.4 million followers praising the joy and happiness in the video.

Recently a video was shared of Sheikh Mohammed bird-feeding

Couple of weeks ago, Sheikh Hamdan shared a video of the Ruler feeding a group of birds in a closed area. Sheikh Mohammed was shown with a handful of food and the birds would walk behind him as he would walk and then stop to feed them in a closed area with sand. The video was viewed by 653,000 of his followers.

Home to 19 bird and animal species, 26 reptiles and 39 plant species, the Marmoom Desert Reserve covers 10% of Dubai’s total area and is one of the many tourist attractions for eco-tourism. The reserve was launched by Sheikh Mohammed in January. The area also covers the Al Qudra area, which has the world’s longest cycling track in a desert.