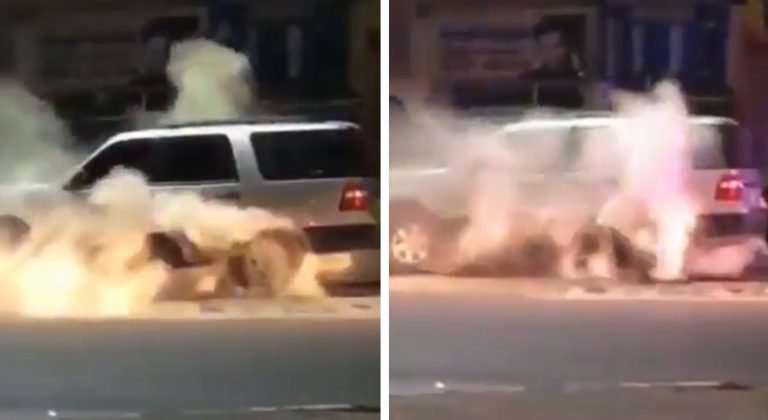 Manufacturing defects have been a continuous problem in the automobile industry and this video of a faulty SUV in Fujairah doing a burnout will make you want to get your vehicle checked.

Yet another case of reckless driving, the incident started when the owner of the SUV-a Ford Expedition hit a lamppost on a street in Fujairah. The accident got more troublesome when the SUV’s gears wouldn’t change. The SUV continued to accelerate, leading to a burnout and it eventually burnt the car’s ignition and wheels.

Continuous burnout led to a fire

By the looks of the video, the SUV’s accelerator was unstoppable to the extent to which the burnout caused a fire. The tires were shown in yellow in the video clip at the end, indicating the fire. However, the Civil Defense soon arrived at the location and cleared the fire. The car owner was rescued and as of now, there have been no reports of injuries.

Besides the SUV, car fires have become dangerously common among electric cars and especially the automobile giant, Tesla has had a history of car fire cases. Recently, the ‘Loaded’ TV show actress Mary McCormack posted a video on her Twitter account showing her Tesla Model S catching fire “out of the blue”. In reply, Tesla made a statement saying it’s a “rare event that a battery fire occurs.”