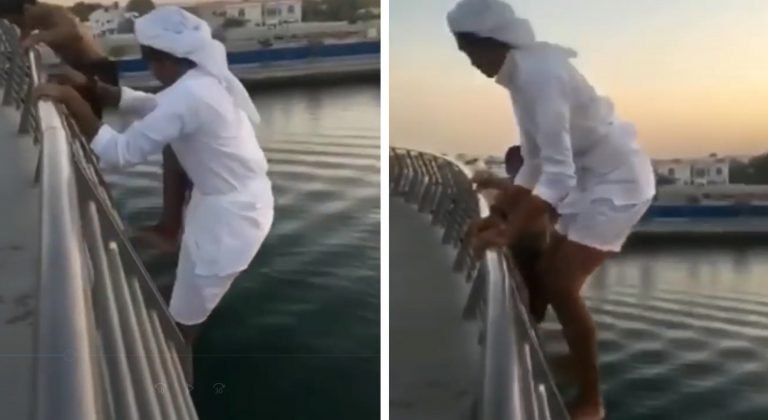 Dubai Police have caught a group of teenagers this week for performing a life-threatening stunt which was recorded and it went viral on social media.

The duo were shown jumping from Dubai Water Canal

Two teenagers were recorded on the video jumping from the centre of Dubai Water Canal and one of them was dressed in a kandoora, who was shown performing a back-flip before he dived into the waters. The person recording the video is also going to face charges for encouraging the duo to perform the stunt.

Such reckless stunts can land people into trouble

Life-threatening actions like these can lead to charges by Dubai Police or imprisonment. Last year, Dubai Police arrested a youngster for posting a vlog of himself walking on top of a skyscraper in the Business Bay area and showing Burj Khalifa and Downtown. The young fella’ was “plucked” by four undercover agents and arrested.

I have been arrested by the CID here in Dubai. Four undercover agents plucked me from my hotel room earlier today with no warning… pic.twitter.com/xdqKNLhijT

Drifting, reckless driving and drag racing can land you hefty fines in the country and there have been numerous cases of car-related stunts. Last year, a video went viral showing a driver in a Nissan Patrol perform doughnuts in the middle of a junction at City Walk. The viral video caught the eye of Dubai’s Ruler, His Highness Sheikh Mohammed bin Rashid Al Maktoum who ordered the driver to perform community service for a month.