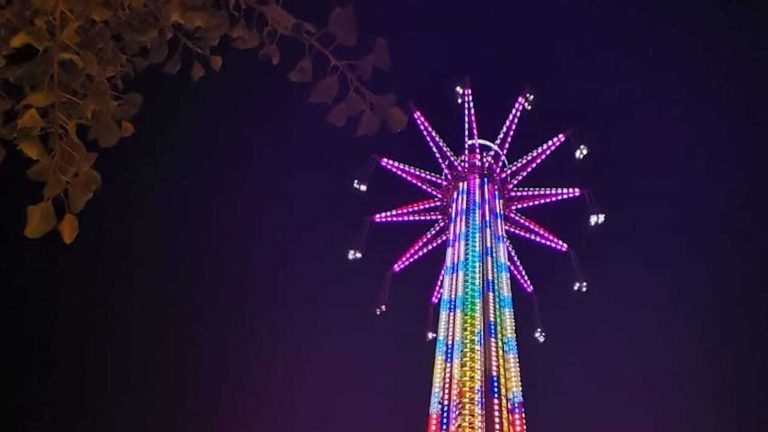 The world’s tallest swing ride has just opened at Bollywood Parks Dubai at 460ft tall – to put it into context, it’s the same height as the Great Pyramid of Giza.

Importantly for those fact-checkers, the Bollywood Skyflyer is 10ft taller than the previous record holder at 460 feet tall.

The swing ride took over two years to build and install and is made from 421 tons of steel. And when you’re riding it, it apparently feels like you’re “hang gliding and swinging.” And then possibly being sick afterwards before queuing up for another go.

The swings move up and down the huge tower while also spinning around. And as you can see from the video, it really is a long, long, looooooong way up. And a long way down.

Staying in the theme park world, the XQuarry Adventure park is the first 4×4 adventure zone in the UAE.

The huge XQuarry adventure park covers almost one million square metres and includes everything from 4×4 tracks to circuits designed for remote-control cars!

In total, there will be nearly 20km of off-road tracks to explore and tackle including 18 obstacles. And there’s plenty for fitness fans too, including a dedicated obstacle running course, mountain bike trails and miles of hiking trails.

And they had a pretty special guest ahead of their opening this Saturday as H.H. Sheikh Sultan Bin Ahmed Al Qasimi put the park through its paces!