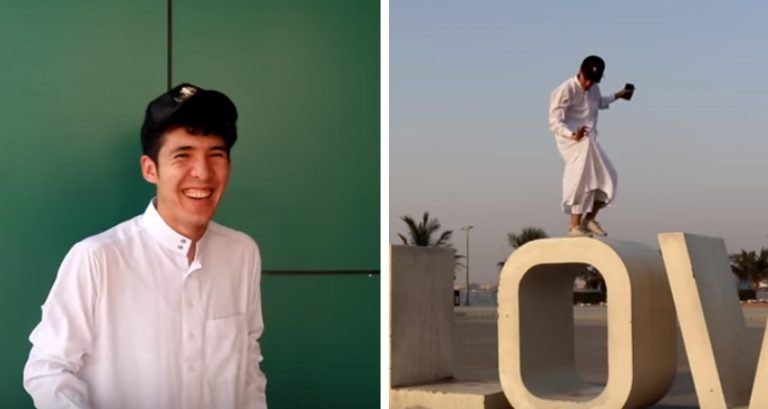 Parody versions are fun, isn’t it? But this Ajman resident’s localized parody from Childish Gambino’s track ‘This Is America’ is so ironic that it will leave you cracked into laughter!

Parody was shot in Ajman!

Within three weeks, the video has gone viral garnering 71,000 views. The YouTuber, who goes by the name DawoodSAVAGE, shot the entire video in Ajman with a bit of stock footage of the Downtown area in Dubai. The most ironic part was when the Youtuber rapped the chorus ‘This is Dubai’ in front of a cutout block which reads ‘#LoveAjman’. Like seriously?!

Lyrics for the parody were totally legit

From the lyrics, shawarma and kandoora seemed like his favourite Dubai essentials. Check out the lyrics praising shawarma, “And if you don’t eat shwarma, Enta Haiwan Kabeer(you’re a good boy)” and the kandoora, “Always wearing kandoora. I ain’t even an Arab but we love this culture.” He even dissed Mo Vlogs for “clickbaiting everyone” using “the tallest tower” and “fastest cars.” Who knows, it could be the beginning of a humorous banter!

Dawood has a parody for Afghanistan too

With even more views(227,000), Dawood initially made a parody on his home country, Afghanistan. Ironically, the entire video was shot in Ajman too! He rapped about how cultural norms like “mehmani”(gatherings), “Attan”(a traditional Aghani dance) and “iftaari” are a big deal in his home country.

Check out his parody for Gucci Gang

Describing himself as the “Coolest Aghan in the world”, he’s had plenty of videos in the past that got viral. One of them was a parody of rapper Lil Pump’s ‘Gucci Gang’ which got an astonishing 345,000 views, showing himself taking over Sharjah in a Toyota Rav4 and skateboarding with a flask and a cup, rapping about Aghan norms. Plus, he even did a dance of the ‘Dame Tu Cosita’ song which got more than 680,000 views!